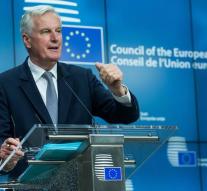 brussels - Almost at the head one year after the brexit referendum and exactly three months after the official letter of cancellation, negotiations on UK departure from the EU begin Monday. Finally, Brussels sighed, that the British government has warned several times that time is coming.

In particular, EU chief negotiator Michel Barnier did not put his impatience under seats or banks. 'We are ready for it,' the Frenchman called the last few weeks regularly. Minutes after Thursday announced the start of the negotiations, he tweeted: 'We begin.'

From the moment when Barnier handles his British counterpart David Davis, EU Secretary of State, Monday morning at 11.00, there have been 21 months before the divorce papers have to be signed. Officially, the EU door is definitely close to the British on 19 March 2019, but in fact there is hardly a year and a half for the negotiations. This is because all national and some regional parliaments have to approve the final result and that takes time.

Next week, it should also be clarified what the British, who, under Prime Minister Theresa May, claim that no deal is better than a bad one, right now. For example, London wants to negotiate on the future relationship with the EU. The 27 do not want to. Barnier has the task of first separating 'sufficient progress' with the divorce before talking later.

Barnier already has two dossiers for Davis: about the financial settlement and rights following the brexit of non-UK EU citizens living in the United Kingdom and Britons living in another EU country. About the final note amounts between 50 and 100 billion euros. There must also be a quick solution to the border between Ireland and the (British) Northern Ireland.

The inclusion of Brussels is that London can not be better off as an ex-member than a full member of the EU. 'No cherry-picking', it's the stopword: not just the crisps from the porridge for London.