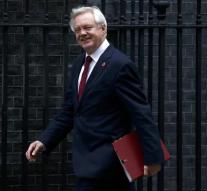 brussels - David Davis, the British minister to the departure of the UK from the EU to lead in the right direction, speaking this week on the European continent with some of his counterparts in the European institutions. The European Union will only negotiate if the departure was formally announced by the end of March, but Davis wants already do some groundwork ' '.

The meeting, according to Davis not attempt to open the negotiations, but preparations for ' a constructive dialogue and a smooth and orderly departure. ' He wants to send a signal that he ' in a spirit of good will, '' seeks an outcome that is in the interest of both the UK and the EU, he said Monday in a statement. ' A positive, strong and productive relationship with our neighbors '' is the goal, according to the British Ministry of departure from the European Union.

Davis is in Brussels on Monday and Tuesday at the European Parliament in Strasbourg. It is the first of a series of visits to EU countries.