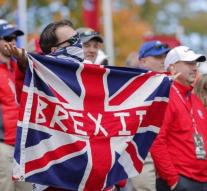 'Brexit the (proposed) withdrawal of the UK from the European Union and the associated political process. The word is sometimes placed directly linked to the referendum of June 23, 2016, which voted a majority of voters to the departure from the EU. '

Also, the word 'Grexit 'is to be found in the OED. That's possible withdrawal of Greece from the monetary union of the euro, the euro zone.