Home / World / Brexit debate has been postponed to 300 amendments 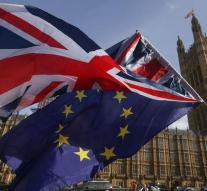 london - The House of Commons debate on the withdrawal of Britain from the European Union has been delayed. The law that allowed the withdrawal should be discussed next week, but because parliamentarians demanded about three hundred amendments to the draft law, that is impossible, reports The Independent.

The British Prime Minister, Theresa May, can not afford a defeat in parliament, certainly not a sensitive issue like the brexit. Her position within the Conservative Party is already shaky and her party has no majority in parliament.

The postponement of the debate is after Thursday's most important EU negotiator Michel Barnier spoke of a 'deadlock' in the negotiations. The British have still not confirmed how much they want to pay to buy from the EU, he said after the fifth round of negotiations.

Germany called on Britain to resume negotiations on Friday just because the government spokesman says 'time is almost up.' '' Great Britain has taken it in its own hands or enough progress has been made to enter into the second phase of the negotiations. '