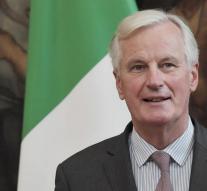 brussels - The EU's main negotiator for the brexit finds Theresa May's speech 'constructive.' According to Michel Barnier, the British Prime Minister in Florence expressed in her speech about the departure of her country from the EU 'willingness to advance' with the negotiations. Barnier recently complained that the British are too vague about what they want.

In a long response, Barnier finds that London for the first time requests access to the single market after brexit. May proposes a temporary transition period after the country leaves the union on March 29, 2019.

This request can be investigated if the other 27 Member States want it, says Barnier. Then the existing EU legislation, funding and supervision will continue to apply. This also applies to security cooperation, which May wishes to continue during that period.

Barnier maintains that the divorce must first be arranged before they can begin the future relationship.