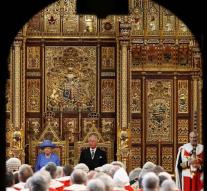 london - The departure of Britain from the EU formed Wednesday as expected one of the main points in the annual 'throne' of British Queen Elizabeth. In the 'Queen's Speech' there were no unexpected big things.

In a ceremony of splendor, pride and tradition, Elizabeth read the intentions of the government of Theresa May for the next two years. In May, May announced by Elizabeth to announce 'the best deal' in the negotiations on the brexit. There will be laws and measures after leaving, such as migration of EU residents and trade.

Queen Elizabeth was accompanied by her son Prince Charles on her visit to the parliament building. He replaced his father, Prince Philip, who was taken care of in a hospital.

Other topics that May want to tackle include the digital security in Britain, health care, the introduction of measures under the Paris climate agreement and the monitoring of the infrastructure.

May promised to give more attention to the concerns of the British people about the cuts to reduce the budget deficit. It was unclear whether the Conservative Party was following the desperate elections that would politically put through. However, the plans do not seem to change much.

May is having a difficult time with a minority government leaning on support in the Lagerhuis of the small Northern Irish DUP. The Conservatives still negotiate with DUP about that support.