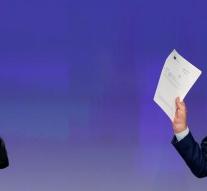 brussels - No progress is being made in the negotiations on the departure of the United Kingdom from the European Union.

That said EU chief negotiator Michel Barnier after the third round of negotiations in Brussels. It started Monday and lasted four days. According to the Frenchman, it is at this pace the question of whether there is an agreement at midnight 29 March 2019, the moment of the actual farewell. He agreed to be impatient and proposes to intensify negotiations.

According to his British counterpart, British Prime Minister David Davis, progress is being made. He announced a short publication of a document from which the differences between the two parties should prove. He also said that London has presented an analysis of the final settlement. 'It must be in line with the law but also in the spirit of the future relationship between the UK and the EU. '

Barnier may not talk about EU's future leaders if there is sufficient progress on the three key issues: Citizens' Rights after the Brexit, the Final Memorandum of Divorce and the Limit between Ireland and North- Ireland, the only country border of the UK with an EU Member State.

At the end of October, Barnier reports on the state of affairs at an EU summit in Brussels and assesses EU leaders or the time is right for the talk about the 'new partnership'.