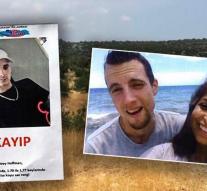 silifke - Haaksbergenaar Björn Breukers- who was the travel companion of deceased Joey Hoffmann (21) in Turkey- reacted to the finding of Joey's body. 'He was not a friend of ours.'

'We have not yet heard the message about Joey,' says Breukers against the AD. 'Nobody told us something. I can not say much about it. Well, what should I think about it? My mother is dead. My father is also dead. Joey was not a friend of ours. He was my father's old neighbor boy. '

Breukers said he had worried about Joey in recent weeks. 'The Netherlands thinks we did not bother us at all. But a day or four after we thought he had taken the plane to the Netherlands, I called his father to ask if he was already home. '

In addition to Breukers, his wife Derya must be available for the Turkish police for the time being. They should not leave the country until the section on Joey's body is completed. 'But I'm not going back home for the time being. In the Netherlands it is much worse than here. All that attention to us. '

Joey Hofmann was trackless for more than a month before found. He was last seen in the company of the couple, also from Haaksbergen. He would help them build a house in Narlikuyu. After divorcing on July 8, nothing was learned from him.