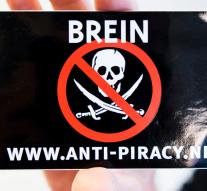 - Stichting BREIN goes full in the fight against illegal music, distributed via Facebook. In the past few days, six groups have been closed on the social network. That states Emerce. The largest group had about 5,000 members.

To date, BREIN has closed more than 30 groups due to the illegal distribution of music, movies, series and books. For example, television shows such as Good Times Bad Times and The Bold And The Beautiful were streamed before that episode was watched on TV.