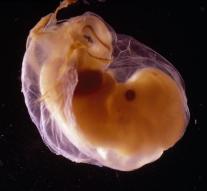 amsterdam - Scientists have managed to change the DNA of a human embryo with a genetic cleavage method to remove a hereditary disease.

The method could open the door to a future in which thousands of hereditary conditions can be eliminated. The science magazine Nature publishes on this.

By cutting a defect from the DNA of a sperm cell and repairing it with a correct piece to the example of the oocyte, the scientists were able to repair the fetal DNA at the time. Such a change is permanent and is also passed on to offspring.

Undisputed, the method is not. Opponents fear that man can now play for God and in future, other hereditary qualities can be changed. This would make the 'man of man' one step closer.

The hereditary condition that was discontinued by the researchers, a heart condition, is caused by a single defect gene in the DNA string. That means that only one pinhole needs to be done. For that, the researchers used a protein as a scissor. That scissors did the job correctly, in half of the cases, the defect was successfully repaired.