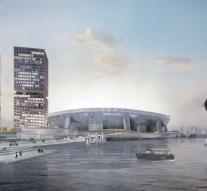 - Feyenoord can get started to build a new Kuip. The Rotterdam club, which is part of Feyenoord City (Feyenoord Stadium and Feijenoord Stadium, have joined hands) got a go from the city council, with 35 votes in favor and 10 against.

A heavy delegation from Feyenoord followed the treatment of the dossier in the city council for almost seven hours at the town hall. President Gerard Hoetmer of the Supervisory Board, Managing Director Eric Gudde and former chairman Gerard Kerkum sat in the public gallery all afternoon and evening. They were lucky afterwards.

Feyenoord City can now work out the Master Plan, which has to be presented in the autumn. Private investors would be ready to embrace the megaproject in Rotterdam-South, which also includes a large housing plan, catering and redevelopment of the old Kuip. However, banks and investors also wanted to see if the municipality is prepared to support the project.

For the football club Feyenoord, it means that in the beginning of 2019, the construction of the new stadium will surely start and that the budget will increase significantly over five years.

In the city council it took hours for Feyenoord's player budget, which goes to a minimum of 25 million euros, and in the years to come the 40 million euro would go. The college of B and W revealed that Feyenoord's business case even looks good at second opinions but that no demands can be made.

'We invest in stones and how can we decide as a college what the Feyenoord players' budgets should be?' That chairman Adriaan Visser (Sport) asked the board.

Also read on Telesport. Nl:- All in all, with five statements about Feyenoord City

However, there was still a motion (23-22), claiming that Feyenoord is using a player budget of at least 28 million euros from the start in the new stadium. The higher the player budget (salary house), the more it contributes to Feyenoord's performance, which will facilitate the negotiation of Feyenoord City with asset providers and developers.

The total stadium, including parking, décor, walkways, costs 365.7 million euros. To this end, Feyenoord receives a new Kuip with 63,000 seats.