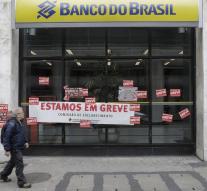 In many major cities in Brazil, public life on Friday was largely halted by a national strike against President Michel Temer's cuts policy. Buses and trains did not work in many places and factories, companies and schools were closed.

In São Paulo, Rio de Janeiro and other metropolises, protesters cast barricades of burning car tires to block highways and access roads to airports. In several places it collided with the police.

It is the first major strike in Brazil in more than twenty years. Trade unions and other groups protest against plans to ease labor rules and reform social security. Many Brazilians will have to work longer for them to retire.