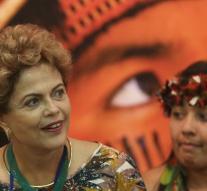 - The Brazilian Senate on Wednesday by a large majority voted for the impeachment of the already suspended President Dilma Rousseff. After almost seventeen hour session gave the Senate by 59 votes to 21 to approve the impeachment proceedings.

Rousseff is by political opponents accused of having tampered with the state budget to increase the chance of being reelected.