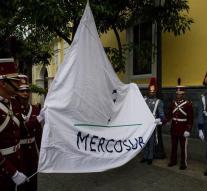 - Brazil is furious with the Uruguayan Minister of Foreign Affairs. Who accused Brazil of having to buy the voice of Uruguay in the president election free trade bloc Mercosur.

The Brazilian government has summoned the Uruguayan ambassador to ask for explanation on the statements of minister Rodolfo Nin Novoa, Brazilian media report. Who argued that Brazil promised trade as Uruguay would allow Venezuela to the presidency.

The government in Brasilia carries a far right-wing foreign policy is now Vice President Michel Temer holds the presidency of Dilma Rousseff was put on non-active in May. The suspended leftist president took her left-wing Venezuelan counterpart Nicolas Maduro sometimes under protection.


An accusation of bribery is in Brazilian politics, which is plagued by corruption scandals, especially sensitive.