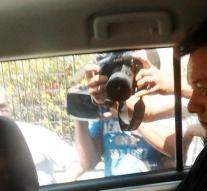 The brother of Wesley, Joesley, is also charged. The brothers own 42 percent of the shares of the huge meat company JBS. The lawyer of the two called the allegations 'incorrect, absurd and regrettable.'

There is a sound recording of a Joesley conversation with President Temer. This is about bribery.

Joesley previously concluded an agreement with justice that he would hand in load material in return for clementie. By chance, however, it came to light that he had retained material.