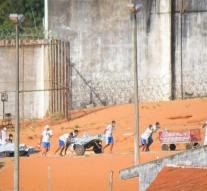 natal - An outbreak of violence between drug gangs in a prison complex in the northeast of Brazil took the authorities in the night from Saturday to Sunday at least 27 people died. Several victims were found beheaded Sunday when security forces invaded the complex and restored the relative order.

The violence erupted according to Brazilian media Saturday at the end of the afternoon loose in the state prison Alcaçuz in Natal, the largest in the state of Rio Grande do Norte. begun for the acts of violence were strangers weapons have thrown over the wall of the complex. The struggle was limited to two houses where members of certain gangs were kept separate.

The death toll was initially estimated at ten, but it turned out to be much higher. A well-established source did not rule out that more than thirty people were killed. He asked for anonymity because the forensic investigation is still in progress.

Since the beginning of this year, when unrest in Brazilian prisons, more than a hundred people in the north of the country killed. Drug gangs whose largest ever arose within prison walls, vying for power in the drug crime. Part of the conflict would be the emergence of a northern drug gang. Moreover, overcrowded prisons in Brazil. According to the authorities, there are about 650 000 prisoners, but 350 000 cells. Prison Alcaçuz has capacity for 620 inmates while in 1150 stuck.