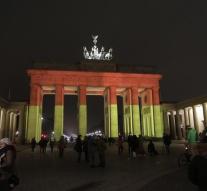 berlin - The Brandenburg Gate is featured Tuesday night in the colors of the German flag for the deadly attack on the Christmas market on Monday. The red and white flag with the Berlin bear is temporarily projected onto the iconic building in the German capital.