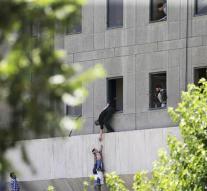 teheran - According to the Iranian Security Minister, Mahmoud Alavi, the brain was killed by special units of the police after the attack in Tehran. 'The commander of the terrorists attacking ayatollah Khomeini's parliament and mausoleum has been killed today,' Alavi said to Tasnim press office on Saturday.