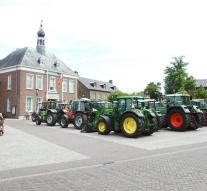 - Hundreds of angry pig farmers pull to the provincial house of North Brabant on Friday afternoon. They are angry with strict and expensive environmental requirements that may cost them.

The biggest obstacle for farmers is in the tightened plans for nitrogen emissions. They have to meet the environmental requirements six years earlier than expected.

According to the Association of Pork Producers Organization (POV), this is especially impossible for smaller farmers. 'It's like having to pay off a mortgage six years earlier,' said the saying lady. The POV says it is fearful that hundreds of farmers can not afford the necessary investments for so-called air purifiers that filter the nitrogen out of the air.

Rabobank, a lender for many farmers, has previously told not to help all these entrepreneurs. As a result, many farmers say bankruptcy. The farmers hope, under the leadership of the POV, that politics can still bring other thoughts. The province has a big screen outside the building so everyone can follow the debate.

The POV hoped that the VVD coalition party could throw some soot in the food. But group chairman Van Gruijthuijsen indicates that his group voted for the measures. The PvdA is also probably voting for the plan of SP and D66.