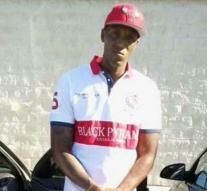 cocoa - 32-year-old Jamel Dunn drowned Monday in a lake at Cocoa in the US state of Florida last week. Two days later, his lifeless body was found.

Dunn found that Dunn could be saved. Five puber boys saw him drowning. But instead of jumping into the water they took their phone to film the drama.

The video went round the social media in the past one and a half week and caused a lot of fuss. Based on the comment they provide, the boys seem to find the drowning Dunn especially funny, as evidenced by what they say while filming him.

'He's a damn junkie. Come on, otherwise you die. We will not help you. '

'No one you're going to help, stupid dick. If you did not have to jump in. '

When Dunn begins to shout, the boys only laugh harder. When he no longer gets up, it remains with an 'Oh, he's dead now', followed by more laughter.

The local police have heard the five boys, but can not do anything against them. Florida is not legally required to help anyone in death. The boys do not seem to fully realize what they have done. 'They showed no repentance, just a smile,' said a police spokesman.

The survivors of Dunn have hardly money to take care of their funeral and have therefore started a crowd funding campaign.