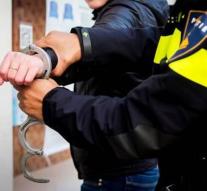 rotterdam - Two Rotterdam boys from thirteen and fifteen years have been arrested for an armed robbery at the end of June. The eldest threatened a caissier of a textile store at the Vuurplaat with a firearm and demanded money. Then he went there with his mate, who was still twelve. How much was taken out, the police did not announce.

One suspect was arrested in Rotterdam on Friday, the other on Saturday at Schiphol. Both are stuck. During the robbery nobody was injured.