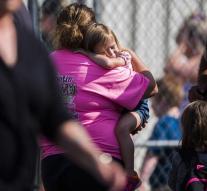 charleston - A 14-year-old boy was arrested in the US state of South Carolina, after he had killed his father and then drove to an elementary school, where he shot at students and teachers. Two students and a teacher were injured. One of them, a six year old boy was seriously injured.

A volunteer firefighter snatched the young gunman and held him until police arrived. Thus he gave a teacher a chance to escape the school with the students.

The accused boy had never been to school. He had the shooting at the school at home for his 47-year-old father shot. The motive is still unknown. Both the gunman and his victims were white.