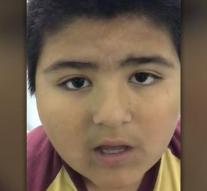 - An 8-year-old boy from Argentina could not stop whining after having accidentally swallowed a party fever. This feast tester got stuck in his throat. An operation had to be successful.

Doctor Gomez Zuviria decided to film the boy as a warning for others before the operation. The movie shows that he continues to whistle while breathing. That video has now been seen over 6.6 million times.