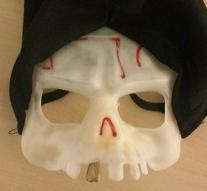 rosmalen - A 14-year-old boy has a Thursday night two girls of 13 very scared in the Brabant Rosmalen. He concluded with a bloody mask to come from behind a wall and hard to yell when the two girls were cycled past.

The girls rode quickly home and told what had happened. After this, the police was informed. Agents around quickly saw two boys running one of which had a similar mask on his head.

The 14-year-old boy from Rosmalen was arrested around quarter past ten. He is referred to HALT.