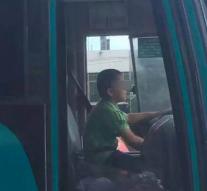 guangzhou - A nine-year-old boy unveiled the streets of Chinese Guangzhou last weekend. He stole a passenger bus and drove there for 40 minutes.

A few shocked pedestrians filmed the busy child. The police responded immediately to the call of concerned residents, but only after 40 minutes they knew to stop the boy. In the almost three quarters that he was wearing the joyrides, he wondered nothing or touch anyone.

The agents then took the boy to the police station, where he gave 'answers' to their questions by keeping his hands in front of him. It is not clear how he managed to dislodge the bus, but the video shows that the door of the bus was trapped.