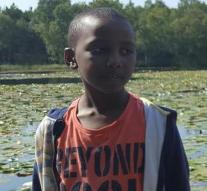 gothenburg - When a shell burst an eight-year-old boy was killed in an apartment in Gothenburg (Sweden). The grenade was overnight thrown through the window around 3 am and exploded in the living room, where the boy was sleeping at that time. here the boy, who comes from England but was staying at that time with relatives in Sweden, was seriously injured and later died in hospital.

It would be Yuusuf Warsame, born and raised in Birmingham, but his parents would have the Dutch nationality. They would have moved to England in 2001, reports the Birmingham Mail.

During the grenade would have five children and several adults were present in the apartment. According to a family member slept Yuusuf's mother and his brother and sister in the same room as Yuusuf.,, It's a miracle they survived. '


The Swedish authorities take the matter very seriously and call it murder.

The apartment where the grenade, was held by a man who was convicted earlier this year for a shooting fatal. Police are investigating whether revenge can be a possible motive.