Home / World / Boy (13) crosses over Mediterranean to save brother 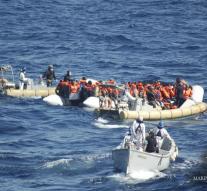 florence - A 13-year-old Egyptian boy has on its own made the perilous crossing to Italy to save his dying brother. He said when he arrived along with hundreds of illegal migrants on the island of Lampedusa.

According to the boy, Ahmed called his brother Farid is suffering from a rare disease and he is doomed because his family can not afford the surgery in Egypt. In desperation, his family sent him to Italy to get help. In a plastic bag, the boy carried the medical documents Farid with him.


After Italian media covered the story came from all sides to help the boy and his brother. For example, a hospital in Florence offered to perform the operation and arranged Prime Minister Renzi yourself that Farid and his parents can come by plane to Italy.

The Egyptian government has also responded to the story. According to Health Minister Ahmed Emad Farid's parents have made no application for an operation paid for by the state. According to him, Farid right there and he asks the parents to quickly contact with the ministry.