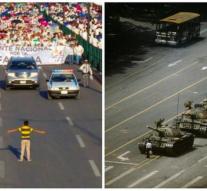 - "How cute... and brave. A boy of twelve years dared to take it alone against a crowd of 11,000 protesters against gay marriage. It turns out that he recorded it for his uncle, who has come out of the closet just before."

"The boy (on the left) told his story in the Mexican media. The moment was captured by an attentive Mexican photographer. Through social media, the boy gets international support. And soon the comparison is made with the \"Tank Man\" (on the right picture), the Chinese student who dared to defy during protests in 1989 propelled tanks in Beijing on the Square of Heavenly Peace."