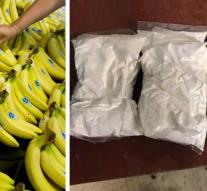 lochristi - It is known that banana boxes are popular among coke smugglers. But the fact that the bags with the white substance would bring it all the way to the bananas is still remarkable. A Delhaize employee at Lochristi in Belgium did the discovery on Sunday morning during the course.

That is what Nieuwsblad reports. The employee was quietly busy delivering the bananas order to the store when he found eight bags of white powder between the cardboard of one of the banana boxes.

'The police suspect that it is cocaine,' says manager Danny Van Assche. Police investigations still have to prove the suspicion is correct, and how the drugs ended up in the box.

The shelf filler laid the bags separately and told the manager Monday morning of the bizarre find. 'I immediately called the Lochristi police. Two agents came to pick up everything. According to them, it is almost certainly about cocaine, 'says Van Assche.

The astonished manager has never experienced anything like this during his twenty-year career with Delhaize. 'I have never heard such a story told by colleagues. 'Usually the drugs are intercepted at (air) ports.

'These bananas came from Columbia. We could read that on the box ', says Van Assche. The country plays a major role in the cocaine trade. 'The bananas have probably matured for two weeks after arrival at our supplier in Evergem, but the boxes are not being opened. '

Van Assche wanted to get rid of the stuff. 'If it had been money, I could appeal to the right of the honest finder', he says laughing. 'But here I want to have as little to do with it as possible. Before you know it, you are jointly responsible. '

The police have confirmed that 'white powder' has been collected at the Delhaize store. 'We can not give more information. '