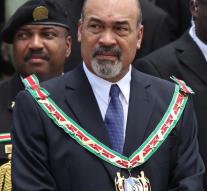 - The end of July announced "testimony" of the Surinamese President Desi Bouterse takes place this weekend in broko Baka, the country of Bouterse. There will speak initiator Sandew Hira with Bouterse about the events that led in the eighties to the murder of fifteen political opponents in December 1982.

These murders care in 2015 for divisions within the Surinamese society. Sandew Hira, pseudonym for Dew Baboeram, is a younger brother of one of the victims of December 8th. Bouterse is seen as responsible for the murders because he was in charge of the army. Hira hopes that the testimony of Bouterse leads to less divisive.

Bouterse 's willingness to deal with Hira talk was a surprise to many. Not everyone is pleased with the initiative because the opinion that Bouterse in court to testify about his possible actions.