Home / World / 'Bouterse will not accept this' 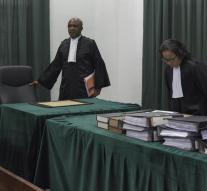 purmerend - The twenty-year cell demand against Desi Bouterse for his share in the December 1982 murders is 'historic.' That says Romeo Hoost of the Committee of Commemoration of Victims of Surinam. He calls it 'especially how the prosecutor turned 200 percent' and after so many years, a claim has been made.

Still, Hoost does not want to cheat too soon. According to him, Bouterse was 'too quiet in the run-up to the session, and we can still expect anything from him. 'In the past, Bouterse has tried to prevent the process against himself, in many ways, according to Hoost. Hoost is afraid that the Surinamese president will intervene because 'he is not going to accept this sentence. '