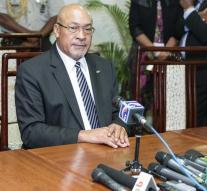 - Desi Bouterse denies that he killed fifteen political opponents on December 8, 1982. He said this in a "testimony meeting " he had with columnist Sandew Hira. That Hira wrote Monday in his weekly column in the Surinamese news Star News.

Bouterse, President of Suriname, applies to many as the prime suspect of the murders in 1982. He was then army chief and thus the highest man of Suriname which was then run by the military. Bouterse denied several years ago already that he killed opponents of his regime. Political responsibility does lay with him, he said. Bouterse stated that the military coup which he committed with fifteen other soldiers in 1980, no result was a runaway trade union conflict, as has been often said, writes Hira. Bouterse and Hira, whose brother was one of the fifteen victims, talked in recent days about the violent events. The reason Bouterse cooperates with the initiative of Hira is that it is not politically colored, but focused on the truth, Hira writes. On December 8 Hira provides a record of the conversation with the Speaker of Parliament. The state broadcaster will transmit the conversation from that day in a number of episodes.
NEW