Home / World / Bouterse concerned about safety and self 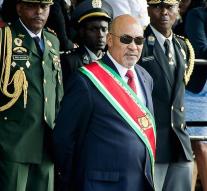 - Suriname's President Desi Bouterse according fallen into a deep constitutional crisis and therefore he goes Wednesday in conclave with his government and the parliament. The special session was behind closed doors and will start at 18:00 hours Dutch time. The meeting is called Committee General.

Numerous MPs have announced anything about a crisis all knowledge and national security, according to them, was not threatened. They think that Bouterse is not so much worried about a crisis, but rather about the criminal proceedings to be resumed Thursday. It is the process for the December murders and Bouterse himself is the prime suspect. The Surinamese law gives the government the power in the interest of national security to stop the prosecution of suspects.

The massacre in December 1982 was an attempt prominent opponents of the coup perpetrators Bouterse, who seized power in 1980, to eradicate. Fifteen prominent Surinamese were killed. Has launched a lawsuit against the suspected leaders in 2007, but was stranded when parliament adopted an amnesty in 2012. But, since December taken by judicial decisions mean a resumption of the process. For example, the amnesty does not apply anymore. Thursday would therefore the process move on. Prosecutors would then come up with their sentencing.


Suriname became independent from the Netherlands in 1975. The country has about 580 000 inhabitants. Bouterse has the military coup perpetrator and if elected president politics dominated from 1980 to 1991 and from 2010 to the present.