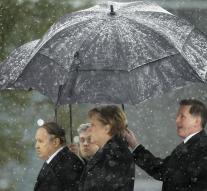 algiers - The two-day visit of Angela Merkel to Algeria was canceled at the last minute. President Abdelaziz Bouteflika is too ill to receive the German Chancellor. The 79-year-old head of state has bronchitis.

Bouteflika occurs hardly in public. He's after a few strokes in a wheelchair would have difficulty talking. Merkel would fly Monday to Algiers to discuss, inter alia, limiting the flow of refugees. A new date has not yet pierced.