Home / World / Bouteflika is back on Algerian soil 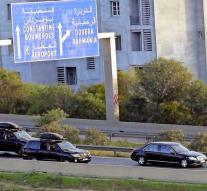 algiers - Algerian President Abdelaziz Bouteflika returned to the North African country on Sunday after a two-week treatment at a Swiss hospital.

On Friday, tens of thousands of people took to the streets in Algiers to protest against a fifth term for Bouteflika. He has been in power for 20 years, but has hardly appeared in public in recent years. The 82-year-old has been in a wheelchair since a heart attack and has great problems with speaking.