Home / World / 'Bouquinistes' on the Seine in need 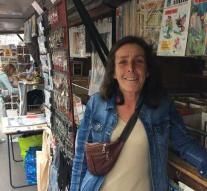 paris - The book stalls on the Seine are just as close to the city of light as the Eiffel Tower and Notre-Dame. The 'bouquinistes' have a hard time because they are getting less and less read, but they see nothing in the proposal to get their green cabinets on the Unesco World Heritage List.

When she started fifteen years ago, Pascale Raffault (52) only sold books. In the course of time, the French always extended her range with magnets from the Iron Lady and images of pin-ups. 'I think that souvenirs provide 60 percent of my income,' she says. 'Reading is out of fashion. '

Although there are fewer, yet enthusiasts and collectors still wander the stalls. Raffault gets her merchandise from brocantes and sometimes people who muck their attic or cellar with beautiful books. 'I'll keep it off', she says optimistic. 'Although I do suffer from my wrist. 'She holds up her hand; her forearm is a brace. 'Because I have to lift that heavy valve every day. '

To support the vendors, the association of 'bouquinistes' wants their activity to be classified as 'intangible cultural heritage' by Unesco. Paris supports the request, which must be done by the Ministry of Culture. 'Nice and nice, but that will not help us', says Raffault. 'In that case, it is certainly not black from the people here. '

The green, often wooden cabinets have been found on the banks of the Seine for centuries. In a French dictionary dating from 1690, there is already a definition of 'bouquinistes': poor booksellers who have no money to open a shop or buy new books, and display old books on the Pont Neuf and along the quays.

There used to be a waiting list to buy such a stall. The cupboards were only released when a bookseller died. Raffault had to wait a couple of years before she could hit her. 'I have four; they were already old and cost 1000 euros each. 'She taps the sheath with her knuckles. 'They are made of ship's wood. This is good against rain, wind and sun. But it does require maintenance. There are now also aluminum specimens. '

Raffault, which is just a stone's throw from Notre-Dame on the left bank of the Seine, operates in a safe area: its stable is not easily broken because it is opposite a café that is open 24 hours a day. 'The disadvantage is that I often get upset in the morning. In the more remote places sometimes closets are opened and emptied. '

Her colleague Jean-Marie (58) is on the other side of the Pont Saint-Michel, which connects the southern part of the city with the Île de la Cité, one of the islands in the river. With the Frenchman, who has managed a stable since 1989, pessimism dominates. In his stable no mischievous pictures and key rings of Chinese make; he only sells books. 'It is going very badly,' he says, sitting on a folding chair in front of his merchandise. 'People do not read much anymore. They prefer to look at a screen. It is a matter of civilization. Those who are still willing, order their books via the internet. '

'The proof is that even now stands empty,' says the Frenchman. 'Fortunately I can almost retire. I'm just shaking my life together. 'Jean-Marie also does not expect much from a Unesco label. 'The Seine banks were added to that list in 1991 and that did not prevent the decline. People have to take a book again. That is the only thing that would help us. '