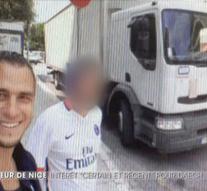 - Just three days before he ran over 84 people with a truck on the boulevard in Nice, Mohamed Lahouaiej Bouhlel posed smiling for selfies with his murder truck.

The French broadcaster TF1 showed selfies which are also acquaintances of the assassin.

A few days later he used to drive the truck to zigzag through the crowd in Nice to make but many victims as possible. Only after two kilometers agents could stop and shoot him.


is becoming known about the perpetrator of the attack in Nice. Read more here.