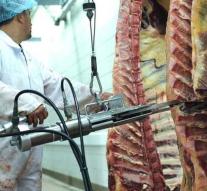 izegem - First there were the horrible images of animal abuse, then the 'Mafia' allegations about Veviba: scandal after scandal smashes the reputation of slaughterhouse group Verbist from West-Flemish Izegem. But manager Louis Verbist claims to the Flemish newspaper Het Nieuwsblad that the organization does not do anything wrong.

The Verbist group, which includes 'mafia company' Veviba, has four slaughterhouses and 19 cattle farms. Things are not going well with the group: Verbist rolls out scandal in scandal. At the end of last year there was animal abuse at the slaughterhouse Izegem, and last week the storm broke loose when it became clear that the company sold meat that was unsuitable for human consumption, 12 years old meat had been delivered to customers in Kosovo and simply sold meat as organic meat.