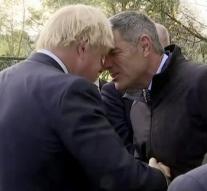 - For the Maori it is very normal, but for Europeans it remains a special face: two unknowns who give each other a 'nose grease'. The British Foreign Minister Boris Johnson was unable to make a nice remark after he received a 'hongi' during his visit to New Zealand. 'Do not do this in a pub in Glasgow.'

The United Kingdom sends envoys to the world to talk about the new trade treaties after the brexit. For this, Boris Johnson is visiting this in Australia and New Zealand. In that second country, Johnson met the New Zealand politician Nathan Guy.

Their greeting began with a traditional 'hongi', with the men touching each other's foreheads and noses.

'Thanks for learning the 'hongi'. It's a nice form of greeting, 'Johnson said. He added: 'But this could be interpreted differently in Glasgow pub,' referring to a 'glassgow kiss', or a painful head shot.

King Willem-Alexander and Queen Máxima also have experience with the traditional way of greeting. During a visit to New Zealand, they also received such a Maori nose greeting. Look back here.