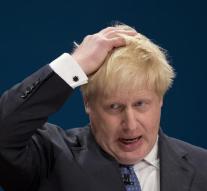 london - The British newspaper The Sunday Times published a column by Boris Johnson, in which he pleaded before the European Union. The current Minister of Foreign Affairs wrote the column already in February this year, when he was still mayor of London. The column was not published.

Shortly thereafter, Johnson was known as a fervent opponent of the EU and as a supporter of brexit. He duped by this new vision of his party colleague David Cameron, the then Prime Minister of Britain.

In the column, he warned of the dangers of brexit including a possible separation of Scotland and Russian aggression. Arguments he later, when they were used by the 'Stay' camp, as panicky pushed aside.

Boris Johnson has already responded to the column and said that his hand column that time meant ironically and that it was 'obvious'.