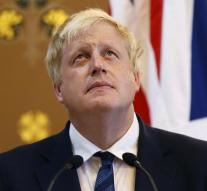 london - His offensive statements directed at, among others, government leaders, according to the British Foreign Minister Boris Johnson often taken out of context. He said Tuesday on whether he still went to apologize to world leaders about his blunt remarks in the past.

,, We can have go ad nauseam about things I've written in the past thirty years, all of which are taken out of context, in my eyes, but important things today require our attention. '

Johnson spoke to the media after his meeting with his US counterpart John Kerry. The new prime minister Theresa May appointed champion of a Brexit despite his undiplomatic behavior last week, Minister of Foreign Affairs. So insulted Johnson in the past, among others, President Barack Obama, Hillary Clinton, Tony Blair and even the Queen.