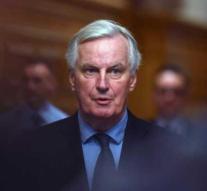 luxembourg - The EU needs more time to reach an agreement on the Brexit with the United Kingdom. 'In the coming weeks, we will take a calm and serious time to achieve the decisive progress we need in the negotiations,' said EU chief negotiator Michel Barnier on arrival in Luxembourg. There he talks to the EU ministers about the developments in the approaching separation of the British.

' We have worked hard with the British authorities over the past weeks and days to find a broad agreement for an orderly departure. But we are not there yet. Some issues, including the border issue in Ireland, are still open. ''

The leaders of the 27 countries that remain in the EU are discussing what steps they should take now on Wednesday evening, based on Barnier's advice at a summit in Brussels. This weekend, a hoped-for breakthrough in the negotiations continued. According to EU President Donald Tusk, a chordless brexit is 'more likely than ever'.

He thinks that the EU should step up its preparations for 'this black scenario', in which London and Brussels disagree without any agreement about the divorce and future relationship. Tusk has asked British Prime Minister Theresa May to come up with concrete solutions on Wednesday evening that could lead to a breakthrough.

Tusk said last month in Salzburg that Wednesday's 'brexertop' would be a moment of truth. If it turns out that 'decisive progress' has been made in the negotiations, he will convene a new summit in mid-November to mark an agreement at the highest level.