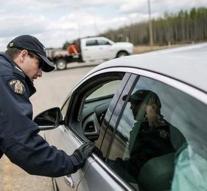 toronto - In July 2007, the Canadian Border Guard also received firearms for the long border guarding. Since then, the agents have never shot an intruder or smuggler. The broadcaster CBC reported Friday that members of the Canadian Border Agency (CBSA) lost a total of eighteen times in ten years.

Eleven times a firearm accidentally dropped off. Six times an animal has been shot to deliver it from its suffering. Once a CBSA agent targeted a malicious attacker and that was a dog.

Nevertheless, the service itself is pleased with the useful firearms. In the ten years that the agents or customs officers are on their way, they have pulled their weapons 299 times without shooting. That was in potentially dangerous situations that have been evicted by the appearance of the firearm.