Home / World / Border between Hungary and Croatia is close 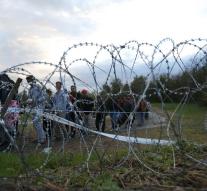 budapest - The border between Hungary and Croatia is closed. As Friday is announced, Hungary at midnight closed the border , the Hungarian news agency MTI reported Saturday . Hungary will thereby curbing the influx of refugees.

The country announced that it still wants to keep open two transit areas for refugees. They can claim asylum.

Most of the refugees now to come to Hungary, do not stay there, but by traveling to Germany for example.

Last month, Hungary closed even though the border with Serbia . It is expected that many refugees now go from Croatia to Slovenia.