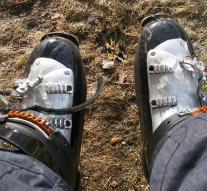 - The Austrian ski resort of Ischgl in Tyrol severely restricts the use of ski boots after sunset. People the evening walking around the footwear after eight hours, now risk a fine. With the measure, the council of the popular ski resort especially want to promote safety. The fine is 25 euros standard, but can be up to 2000 euros for notorious offenders.

Skiing and snowboarding in Ischgl may not even after eight, because that is in the dark danger to others. With skischoenverbod wants the council mainly take the skiers to himself in protection. 'With boots can slip on asphalt,' Mayor Werner Kurz explained to the Austrian broadcaster ORF. 'They cause noise. '

Who after a day on the slopes until after eight sticks in the pub and not ordinary shoes, by itself, can always take another taxi, the municipality argues. To legally be able to step in remains permitted to make up to 10 meters on ski boots.