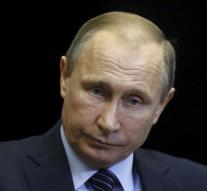 moscow - About a thousand Russian executives get around New Year a special gift sent from the Kremlin. It is a book of four hundred pages' Words that change the world 'hot. It is a comprehensive collection of speeches of President Vladimir Putin.

According to the publisher, Anton Volodin, Putin's statements are often prophetic. It is our attention that what Putin says, in one way or another truth , said Volodin. The speeches and interviews covering the years 2003 to 2015.

On the internet there by Russian critics of Putin jokes about the 'Putin Bible. Which is strongly reminiscent of the Little Red Book of Chinese ruler Mao Tse-tung (1893-1976), the Green Book of the Libyan dictator Gaddafi (1942-2011) or the Reflections on the Spiritual Values ​​of the Turkmen, the 'Father of Turkmen, 'Saparmurat Niyazov (1940-2006).