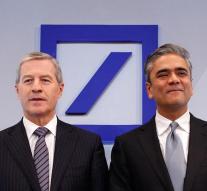 - Deutsche Bank, Germany's largest bank, will reclaim bonuses of six former directors. Include Jürgen Fitschen, Anshu Jain and Josef Ackermann have to cough up millions. It reports the newspaper.

According to the newspaper examines Deutsche Bank not only planned or bonuses can be deleted, but the bank also plans to reclaim old payments. The total amount would run into the tens of millions. To recover the money, the bank according to the Süddeutsche Zeitung have regulations which come into force in early 2017 to use.

The bank, once the most powerful financial institution in Europe, is under pressure to strengthen its capital buffers. This is necessary because the concern billion penalties hanging over the head, especially in the United States because of the role it played in causing the financial crisis of 2008. Justice in the US holds responsible the bank for trade in toxic mortgage products and requires 14 billion of the company.