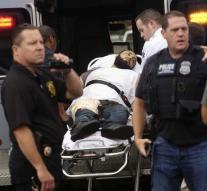 - The man who is suspected of the attacks in New York and New Jersey last weekend, already bought months ago stuff for his self-made bombs at the online store eBay. This is apparent from documents on the case against the man, the 28-year-old Ahmad Rahami.

In June bought the Afghan born on the Internet more than 200 balls of lead and iron, to serve as bullets. Rahami hoped \'that the sound of the bombs would resound through the streets,\' as can be read in a journal that has seized the police. He wanted to die as a martyr, he wrote.

In the diary he continues his \'brother\' Osama bin Laden to worship. Bin Laden was solely responsible for the attacks on September 11, 2001. Also Rahami accuses slaughtering the United States to Islamic fighters in Afghanistan, Iraq, Syria and Palestine.

Governor Andrew Cuomo of New York said Sunday still have no reason to believe that the arrested suspect Ahmad Khan Rahami belonging to a terrorist cell. The Prosecution considers the attacks in New York and New Jersey, however, as terrorist acts. The research has been operating as such by law, said Attorney Loretta Lynch Tuesday.