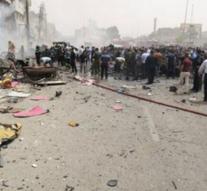 baghdad - In two bomb attacks in Baghdad have come in the night from Saturday to Sunday dozens of people dead or injured. Reported that the local television station al-sumaria.

In the Karrada district of the Iraqi capital, a car bomb went off near a restaurant, police reported. At least twenty people lost their lives or were injured. Karrada is a popular shopping area, where many people come out at night to eat during Ramadan. On images to see a huge conflagration, caused by the explosion.

A second bomb went off in the al-Shaab district in the north of the city. There too, several people were killed or wounded in the explosion. The attacks were claimed by Islamic State.