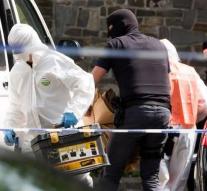 brussels - In the house of the man who wanted to attack in Brussels-Centraal on Tuesday evening, ingredients for making a bomb were found. That is what the news sender reports VTM based on a source.

The house of 36-year-old Oussama Zariouh in the Brussels municipality of Molenbeek was searched for a long time on Wednesday. There would be found acetone, which could make a so-called TATP bomb. It was used in the last year's attacks in Brussels. 'The manuals are just on the internet, the ingredients are at the drugstore,' says a terrorist expert against VTM.

SEE ALSO: This is the 36-year-old offender from Molenbeek

There may be more addresses where the Moroccan man lived. That is why family members are questioned, says the expert. The explosive that Zariouh wanted to explode on Tuesday was only partly, causing no wounds. Zariouh was shot by a military.